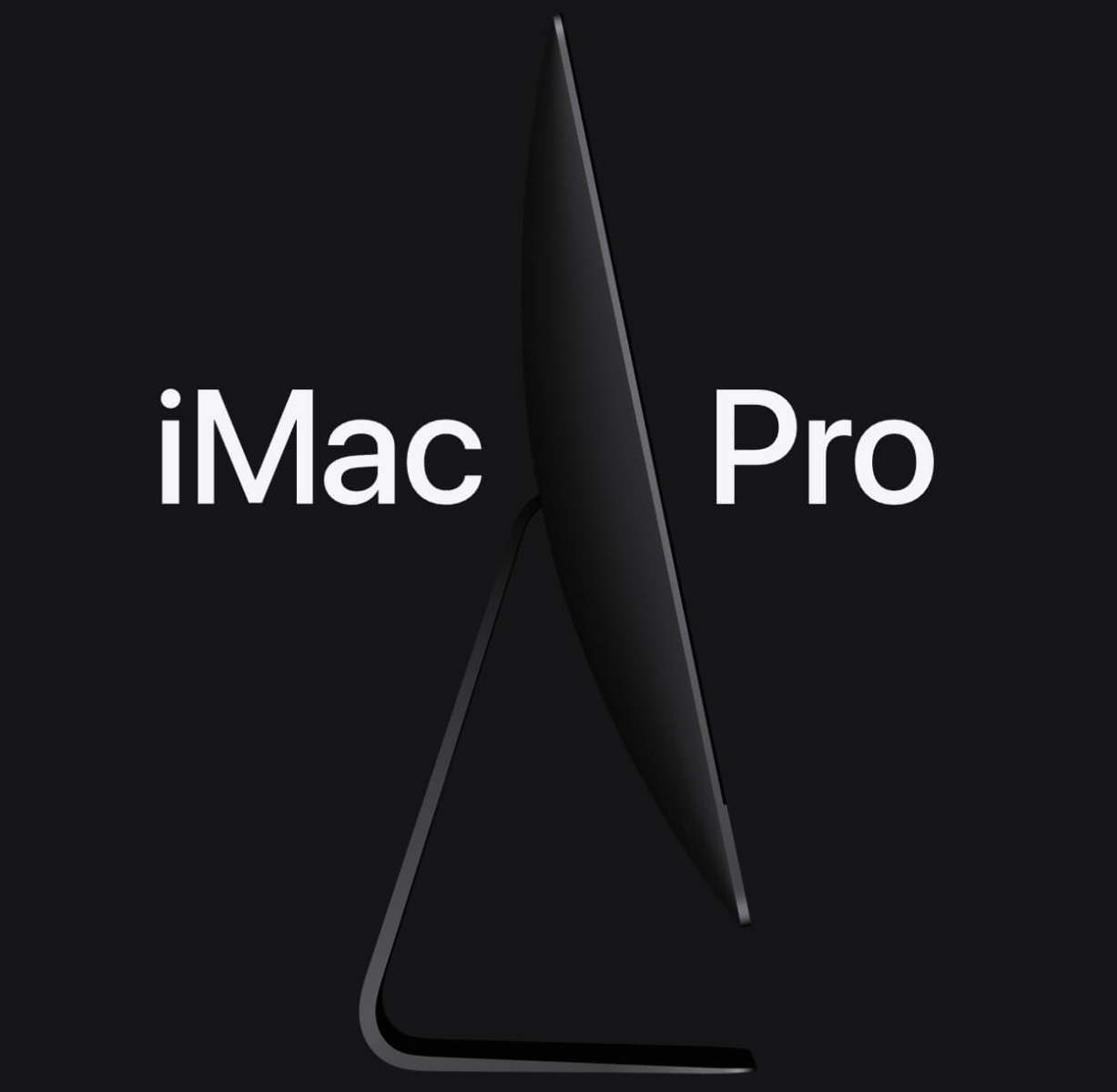 Power to the pro

Pros love iMac. So Apple created one just for you. It’s packed with the most powerful graphics and processors ever in an iMac, along with the most advanced storage, memory, and I/O — all behind a breathtaking Retina 5K display in a sleek, all-in-one design. For everyone from photographers to video editors to 3D animators to musicians to software developers to scientists, iMac Pro is ready to turn your biggest ideas into your greatest work. 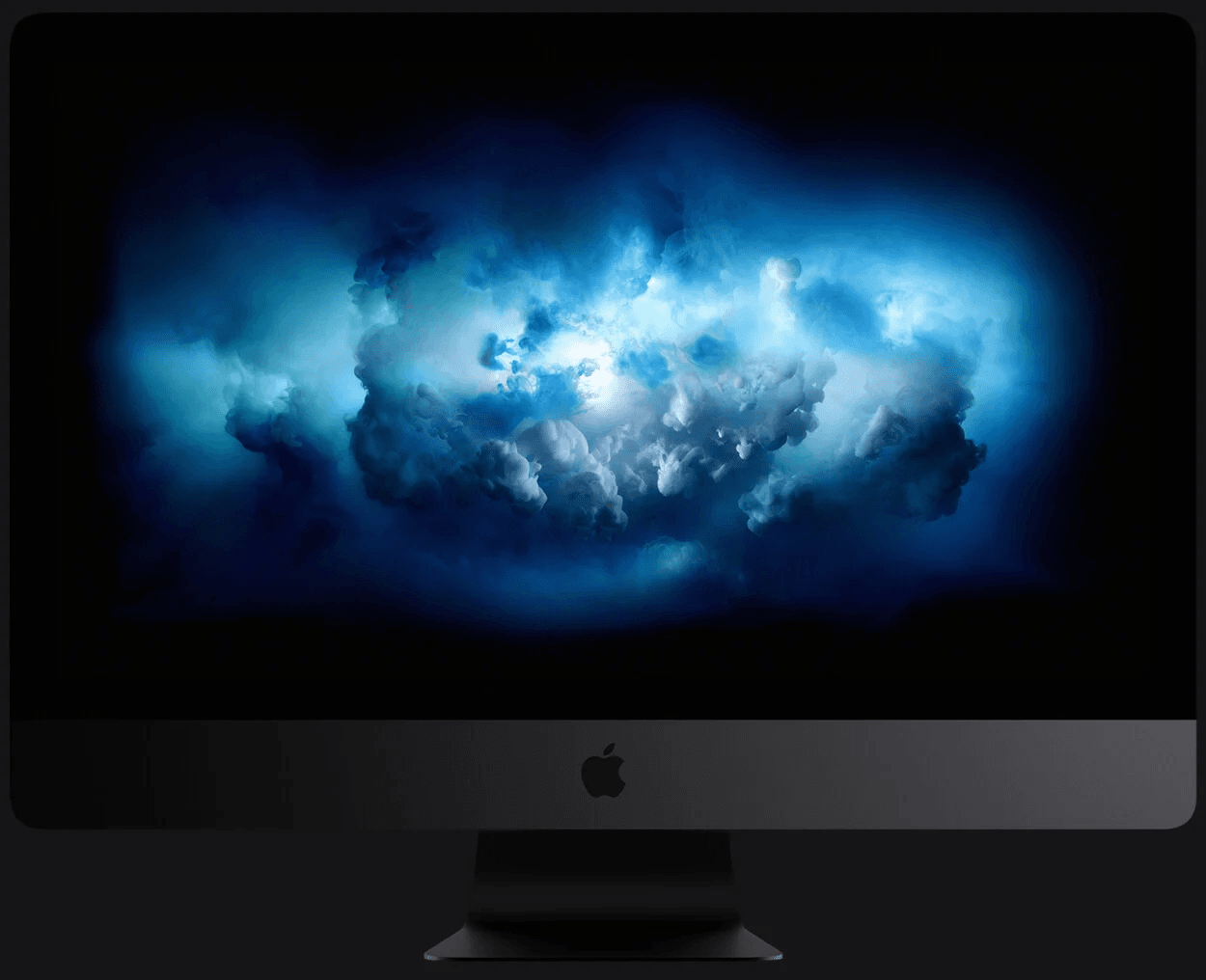 An iMac with 4 cores is remarkable enough. But an iMac with 8, 10, 14, or 18 cores is an entirely different creature. Add Turbo Boost speeds up to 4.5GHz, and iMac Pro has the power and flexibility to balance multicore processing with single-thread performance. With AVX-512 vector instructions and an advanced cache architecture, the processor handles even more data — even more quickly. Which means you can render images, edit up to 8K video, manipulate photos, create real-time audio effects, or compile your next five-star app — all at lightning speed. 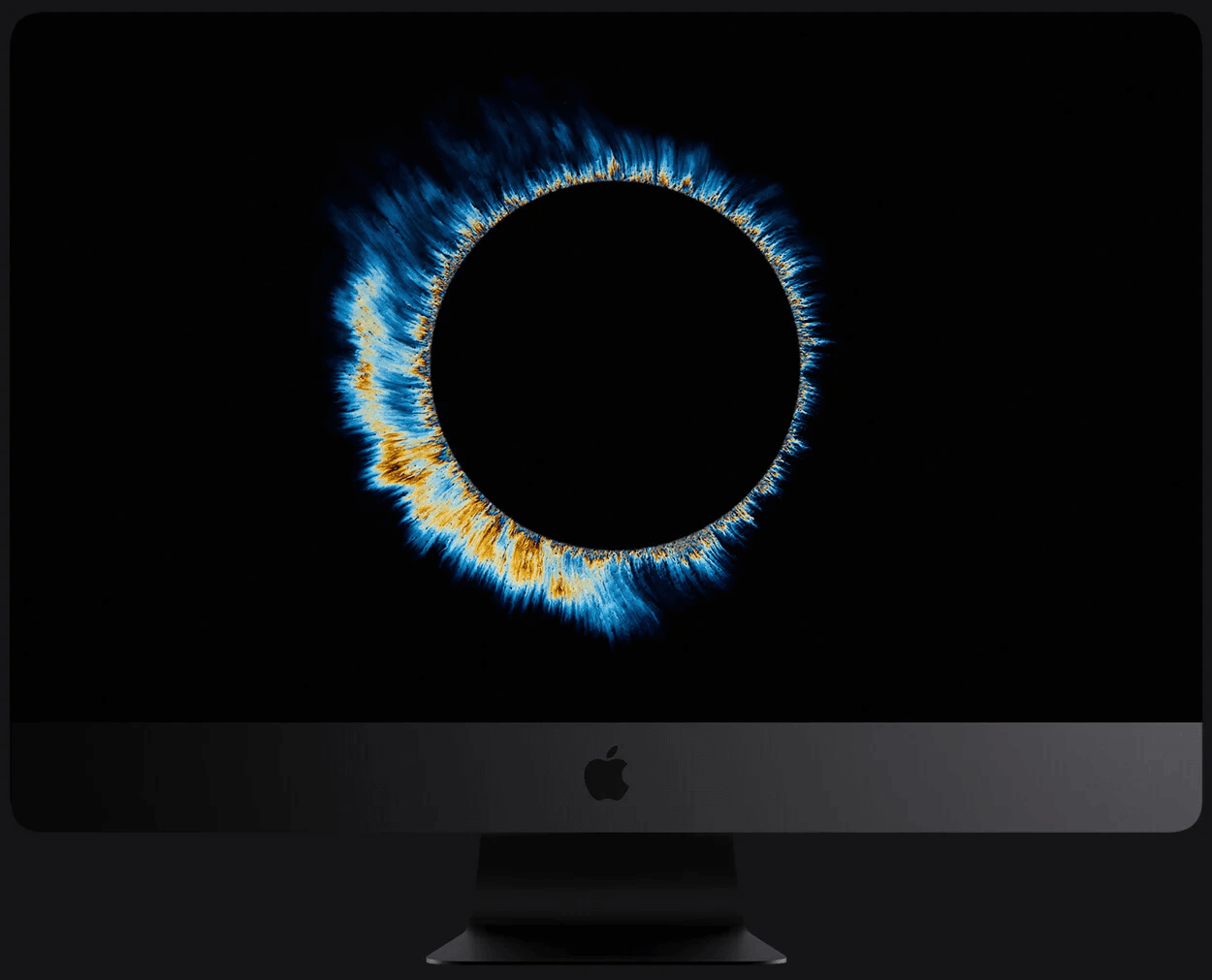 Turbo Boost up to 4.5GHz 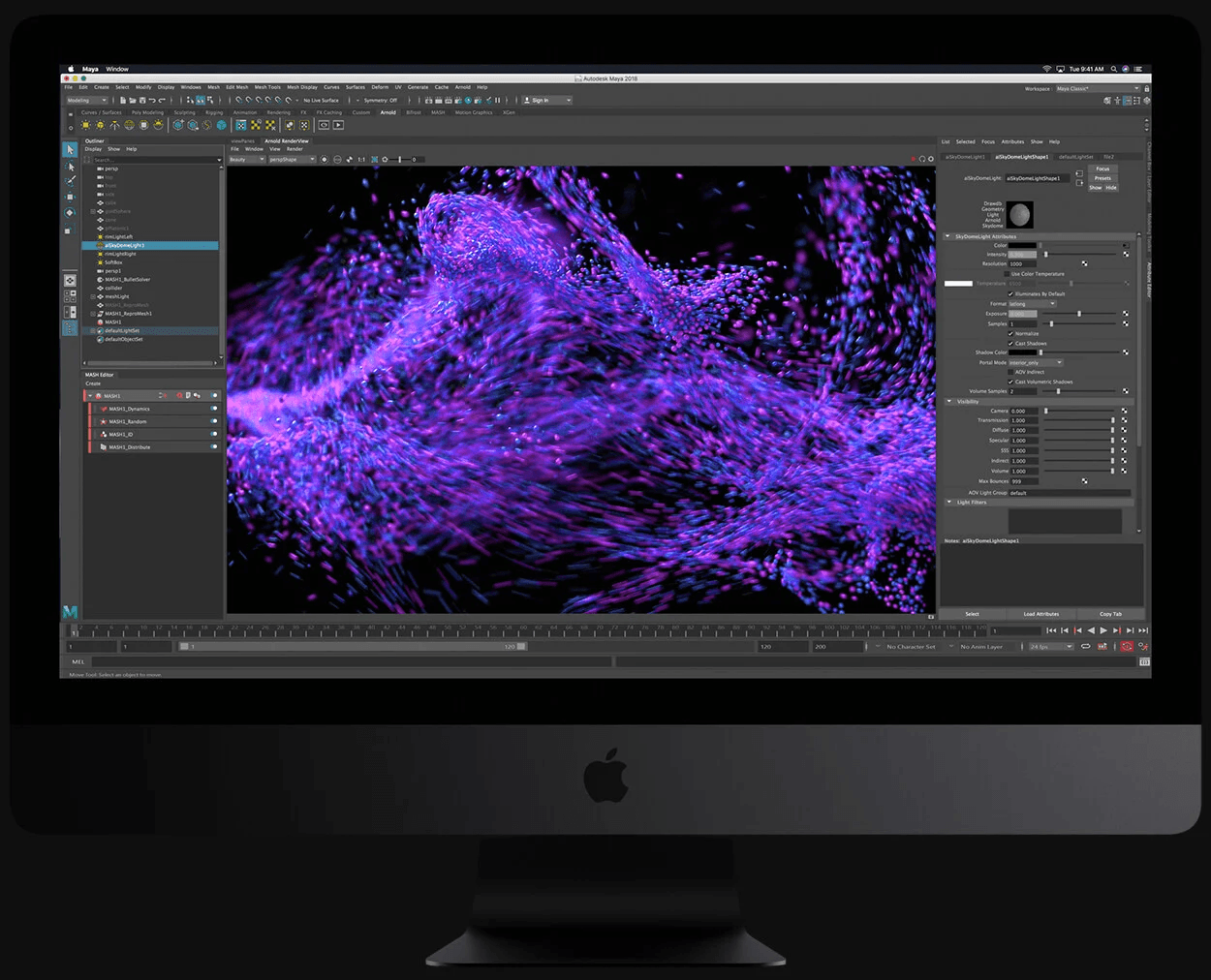 Billowing smoke. Torrential rain. A wheat field in the wind. With up
to 18 cores and Hyper-Threading, iMac Pro lets you build and render
particle systems of all kinds — static or animated, 2D or 3D — with ease.

The beast behind the beauty.

Featuring Radeon Pro Vega graphics, iMac Pro delivers the best graphics of any iMac. The first Mac with Vega architecture features up to 16GB of High Bandwidth Memory, which helps deliver a major jump in performance. This translates to higher frame rates, real-time 3D rendering, more lifelike special effects, and gameplay at max settings. It also supports both single- and half-precision computing, so operations that don’t require a full 32 bits of precision can be performed twice as fast. How fast? Up to 24 teraflops fast. 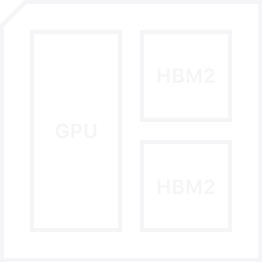 On-package HBM2 replaces external VRAM, so the GPU can fetch data at up to 512GB/s. 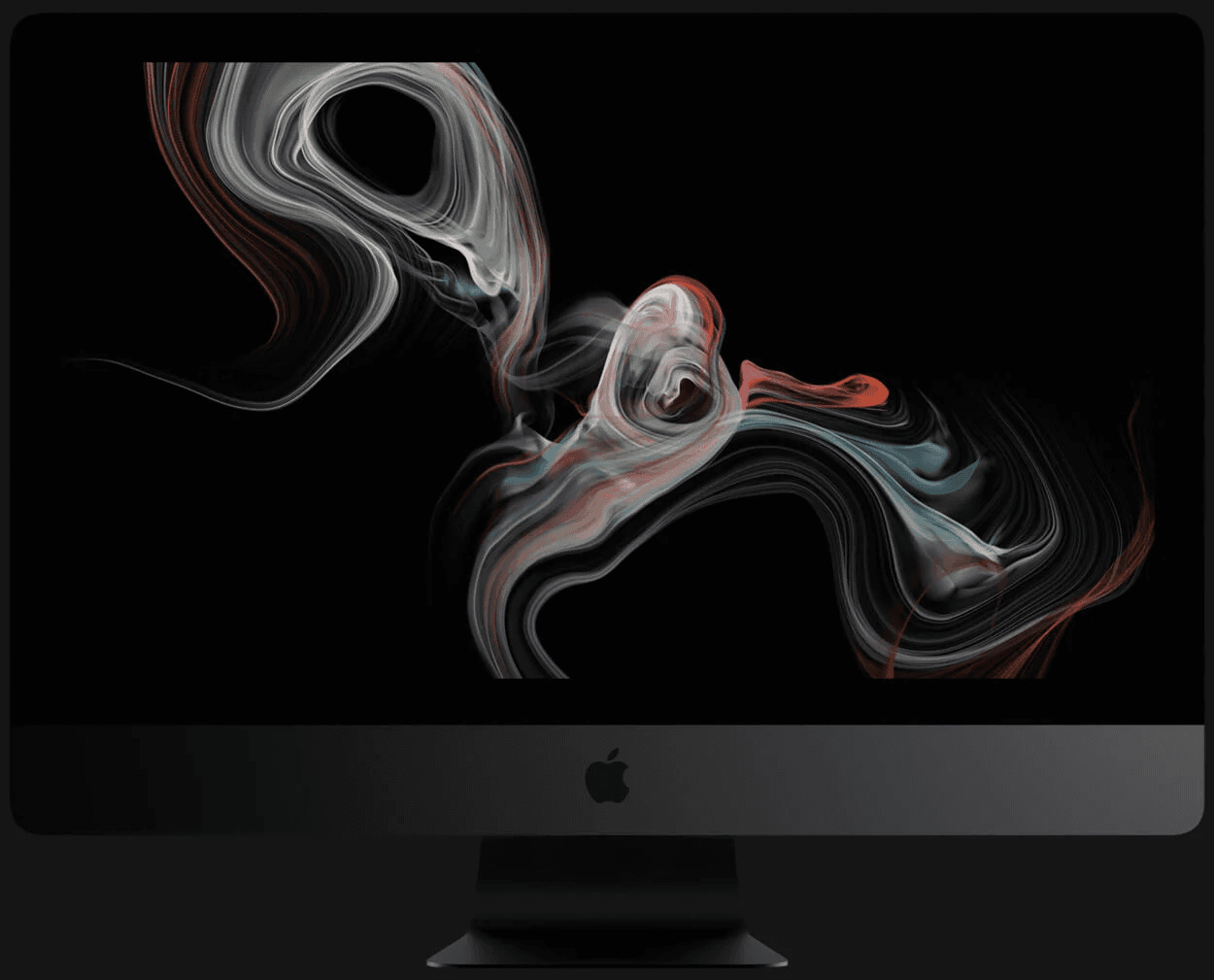 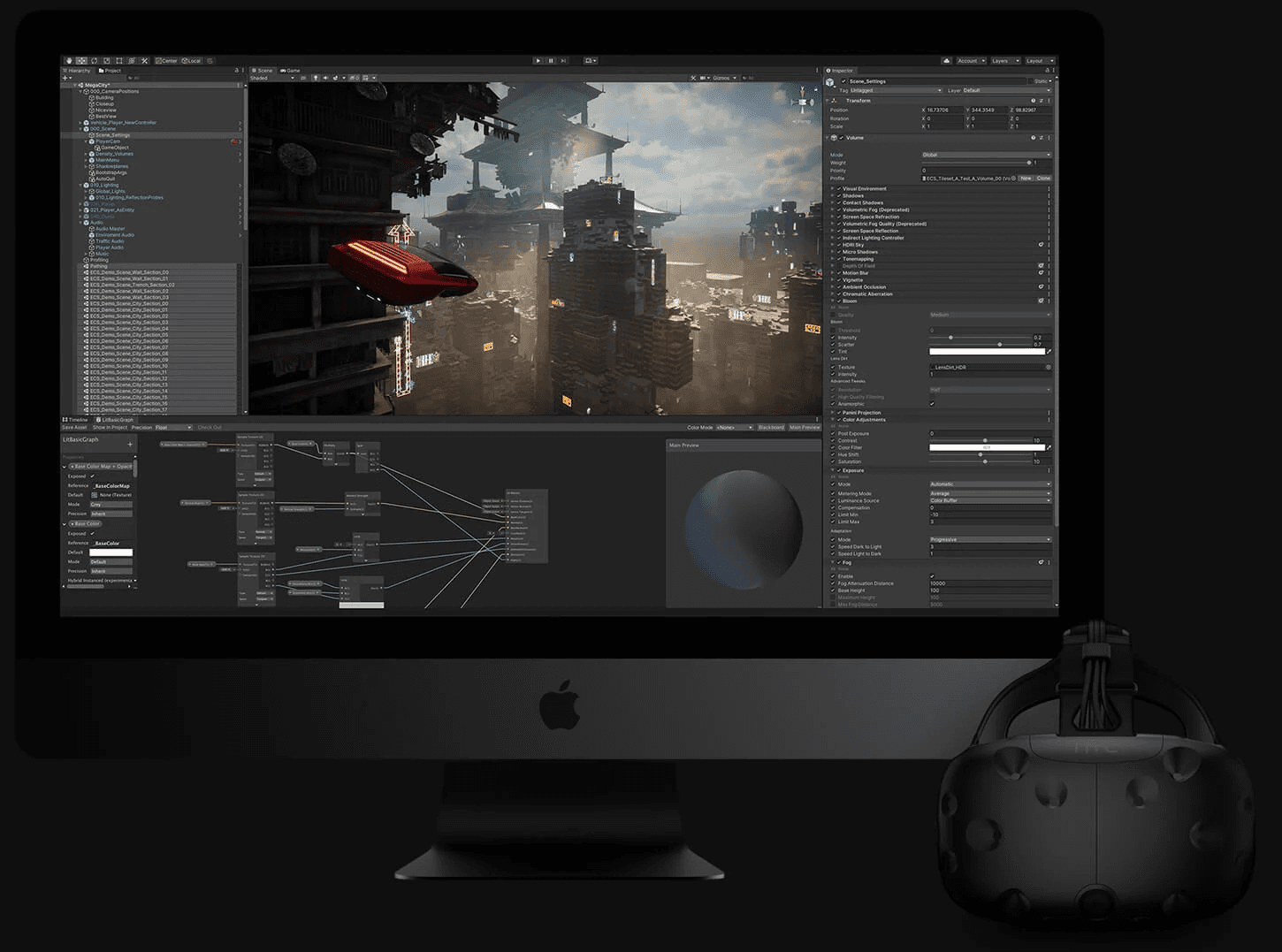 With the Vega 64X GPU, iMac Pro lets you create 3D environments
up to two times faster,1 then render them in stunning photorealistic detail.

iMac Pro is optimized for performance across the board.
Here’s how it compares to iMac and Mac Pro.

With four channels of memory, iMac Pro can now accommodate up to 256GB. So you can visualize, simulate, and render huge 3D models. Create multiple test environments for cross-platform development. And keep numerous apps open at the same time. It’s all powerful. For all the things you want to do. 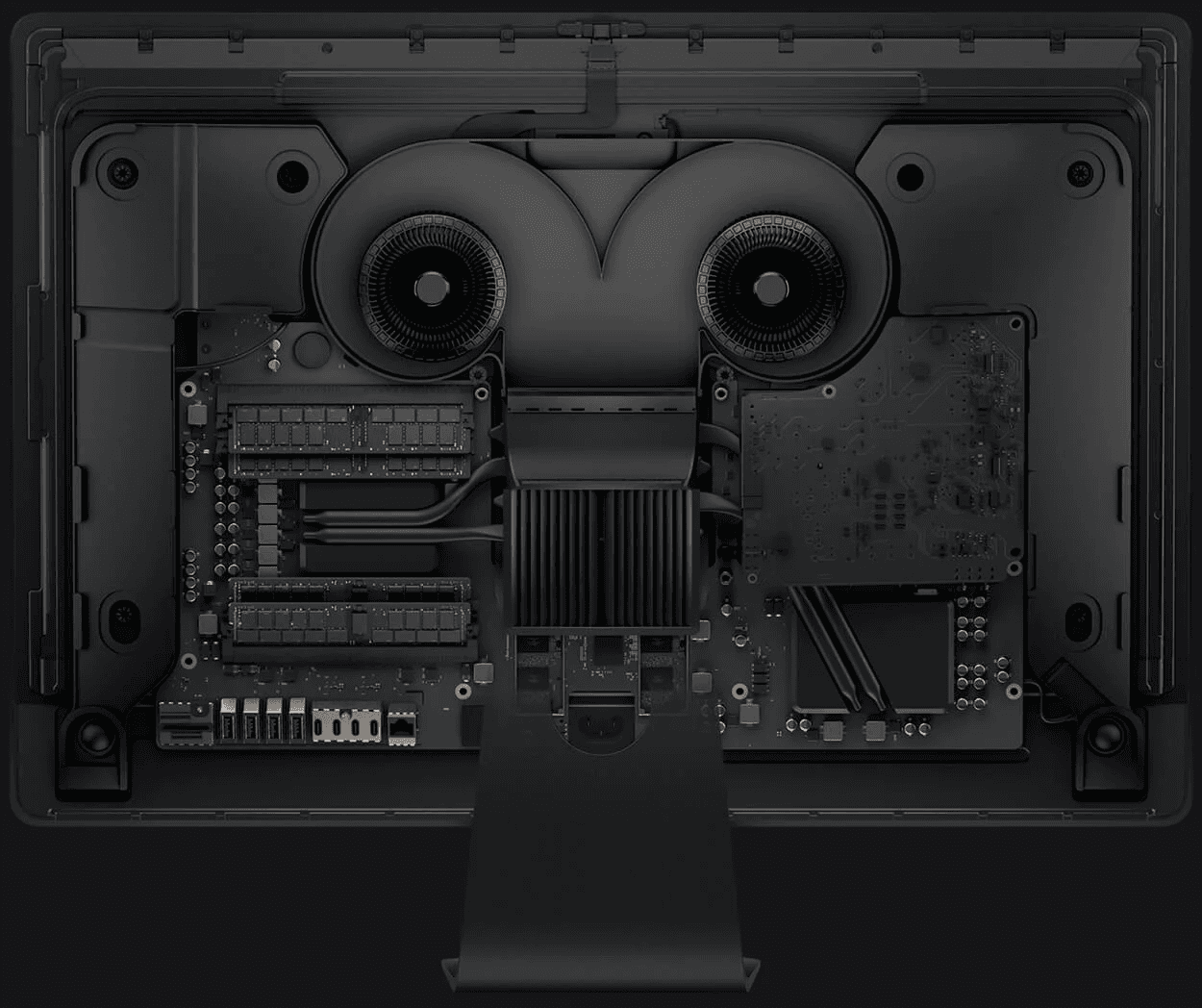 Up to 4TB of all-flash storage lets you work on large 4K and HD projects regardless of codec. And with up to 3GB/s throughput, loading huge files and launching apps is faster than ever.

Every iMac Pro is equipped with the Apple T2 Security Chip, Apple's second-generation custom Mac silicon. By redesigning and integrating several controllers found in other Mac systems — like the system management controller, image signal processor, audio controller, and SSD controller — the T2 Security Chip delivers robust capabilities to the Mac. For instance, the image signal processor works with the FaceTime HD camera to enable enhanced tone mapping, improved exposure control, and face detection–based auto exposure and auto white balance. The T2 also makes iMac Pro even more secure, thanks to a Secure Enclave coprocessor that provides the foundation for encrypted storage and secure boot capabilities. The data on your SSD is encrypted using dedicated AES hardware with no effect on the SSD’s performance, while keeping the Intel Xeon processor free for your compute tasks. And secure boot ensures that the lowest levels of software aren’t tampered with and that only operating system software trusted by Apple loads at startup. 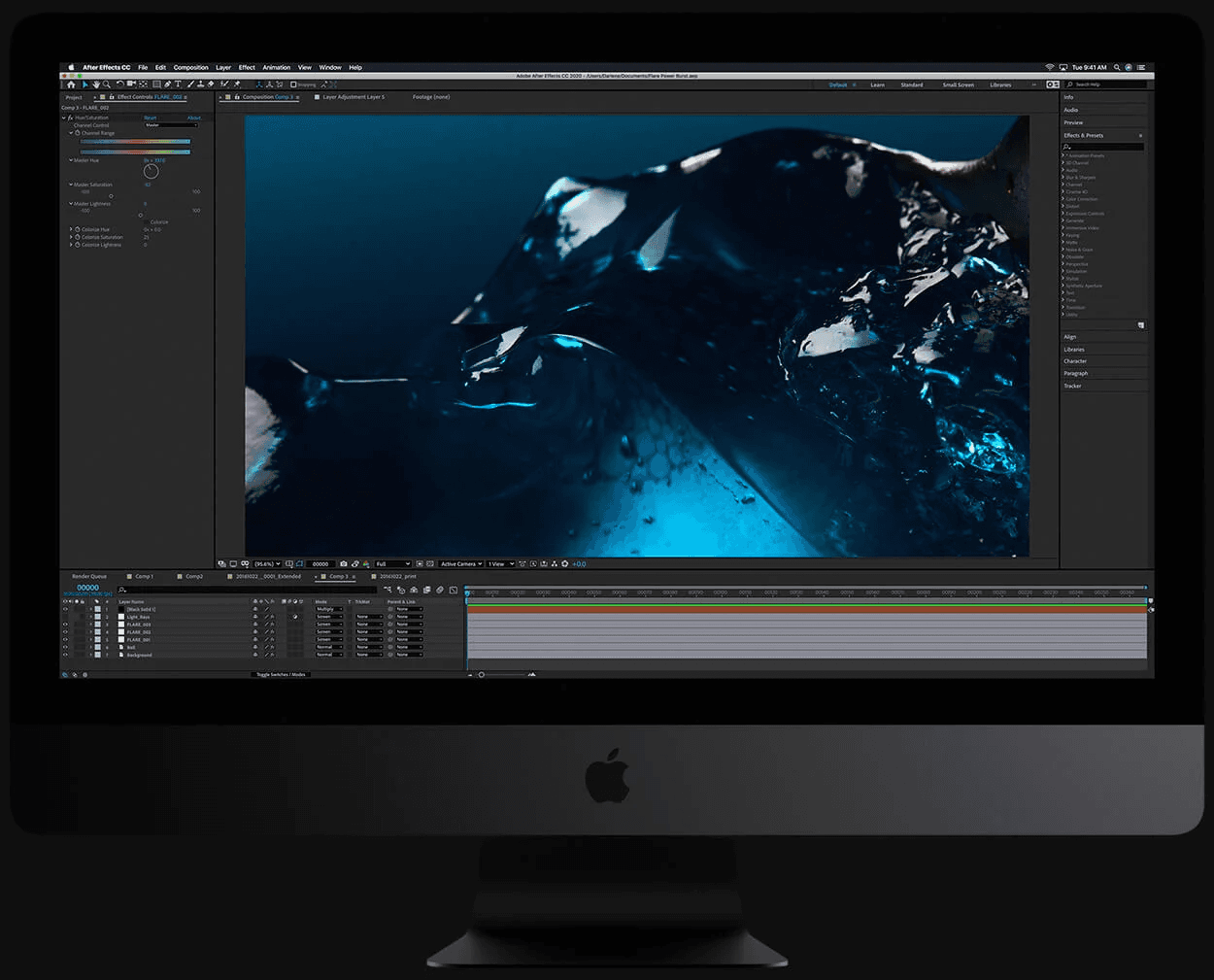 iMac Pro has the bandwidth to effortlessly handle multiple
streams of video. And with up to 4TB of all-flash storage, saving
and loading humongous projects is all in a moment’s work.

As you’d expect from a pro machine, there are plenty of high-speed ports
to create a high-performance workstation. Four Thunderbolt 3 ports let
you connect two 5K monitors — for 44 million pixels total — and transfer
data at a blazing 40Gb/s. And there’s something you probably didn’t
expect in an iMac: 10Gb Ethernet. So sharing files between desktops,
or working with high-performance network storage, is up to 10 times faster. 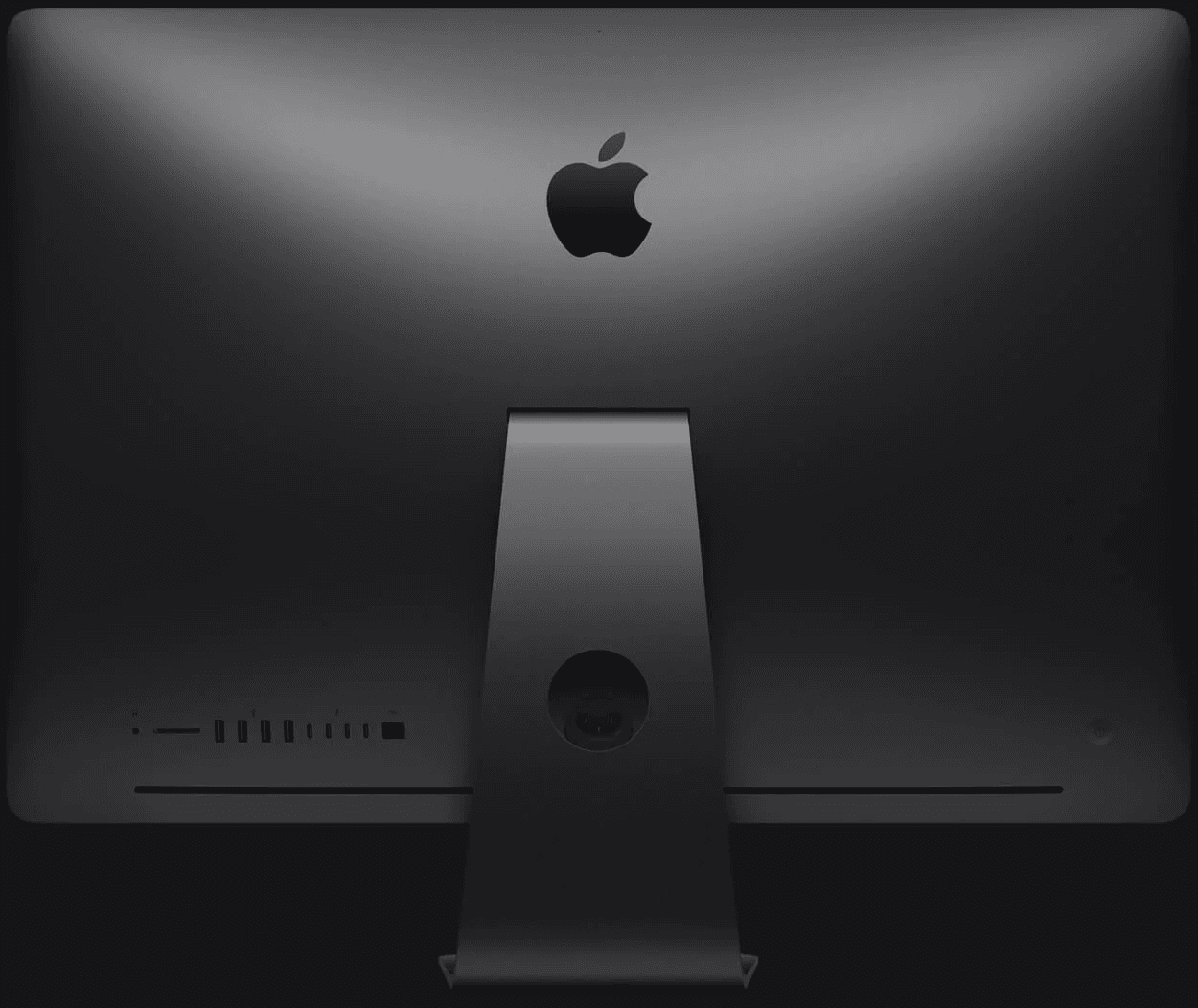 Up to 44 million pixels 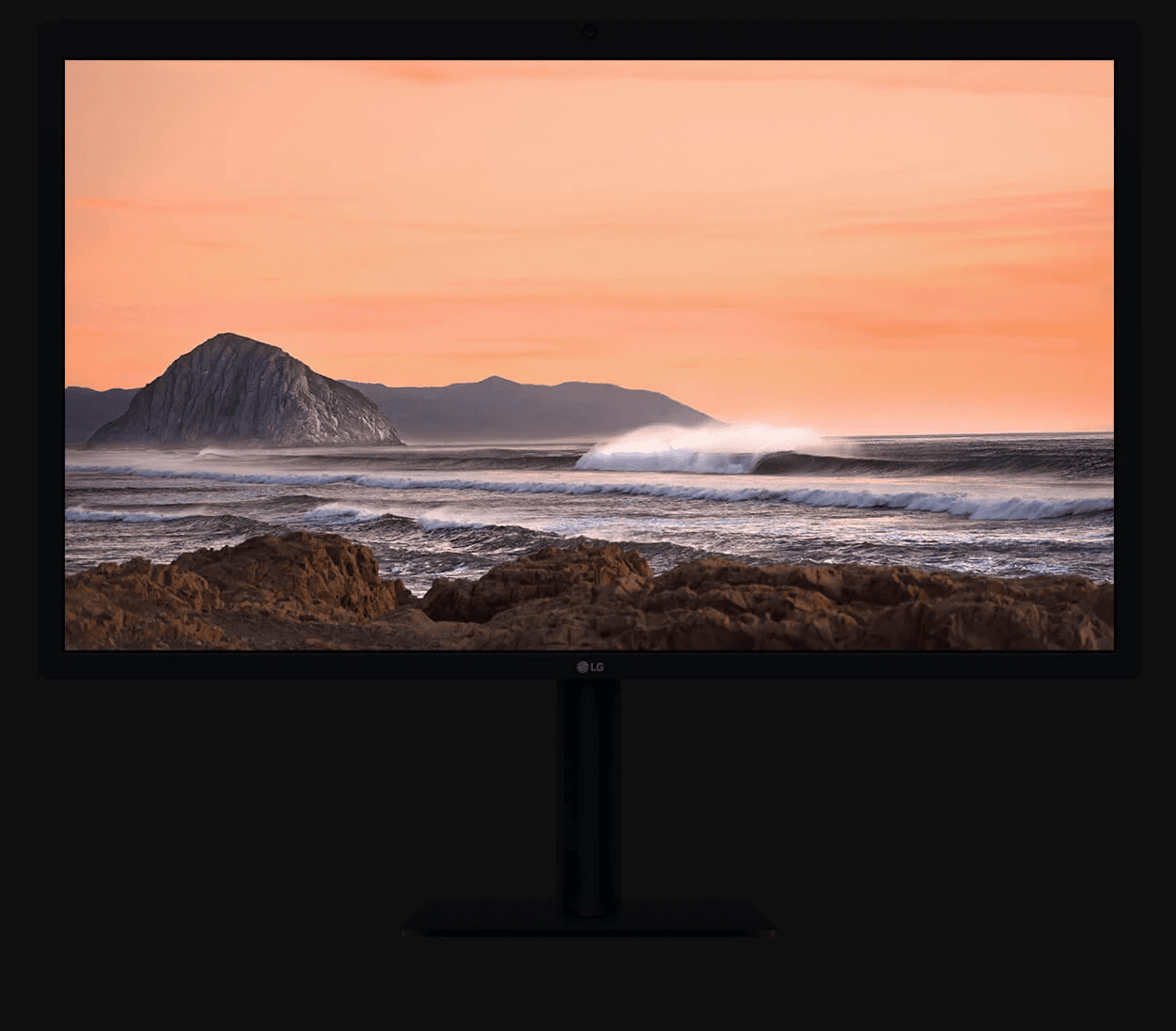 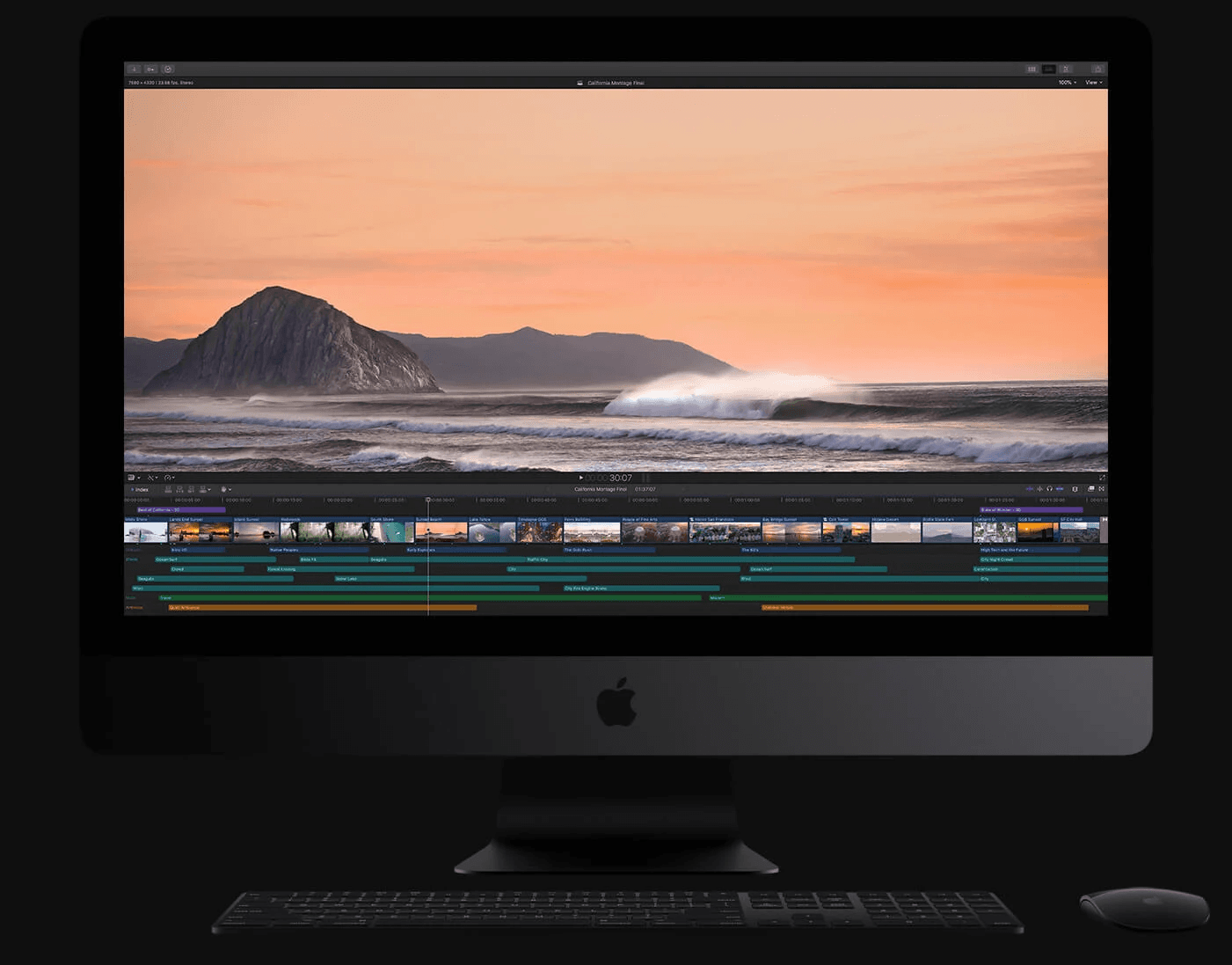 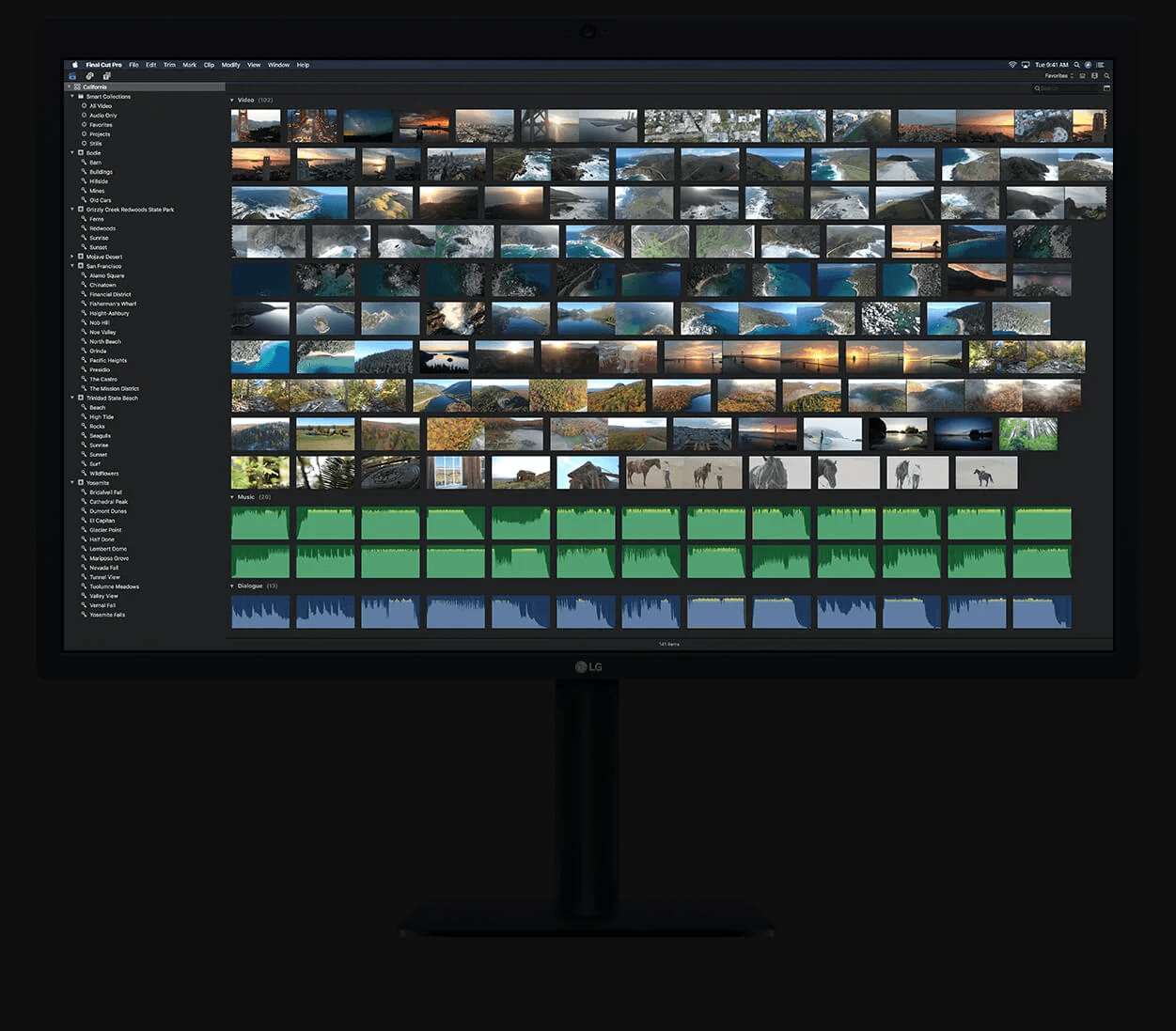 See your work on the big screens.

Create a powerful workstation by connecting two RAID systems and two 5K displays to the four Thunderbolt 3 ports. Then see your work on a 44-million-pixel canvas.

It almost goes without saying: If it’s an iMac, it will have a gorgeous display.
And iMac Pro doesn’t disappoint. Its 27-inch Retina screen is crisp and bright,  with 500 nits of brightness across its 14.7 million pixels. It’s as if the sleek, all-in-one design disappears behind the stunning screen — so you can focus
on your content. Along with P3 colour and support for a billion colours,
iMac Pro delivers spectacular, true-to-life images. 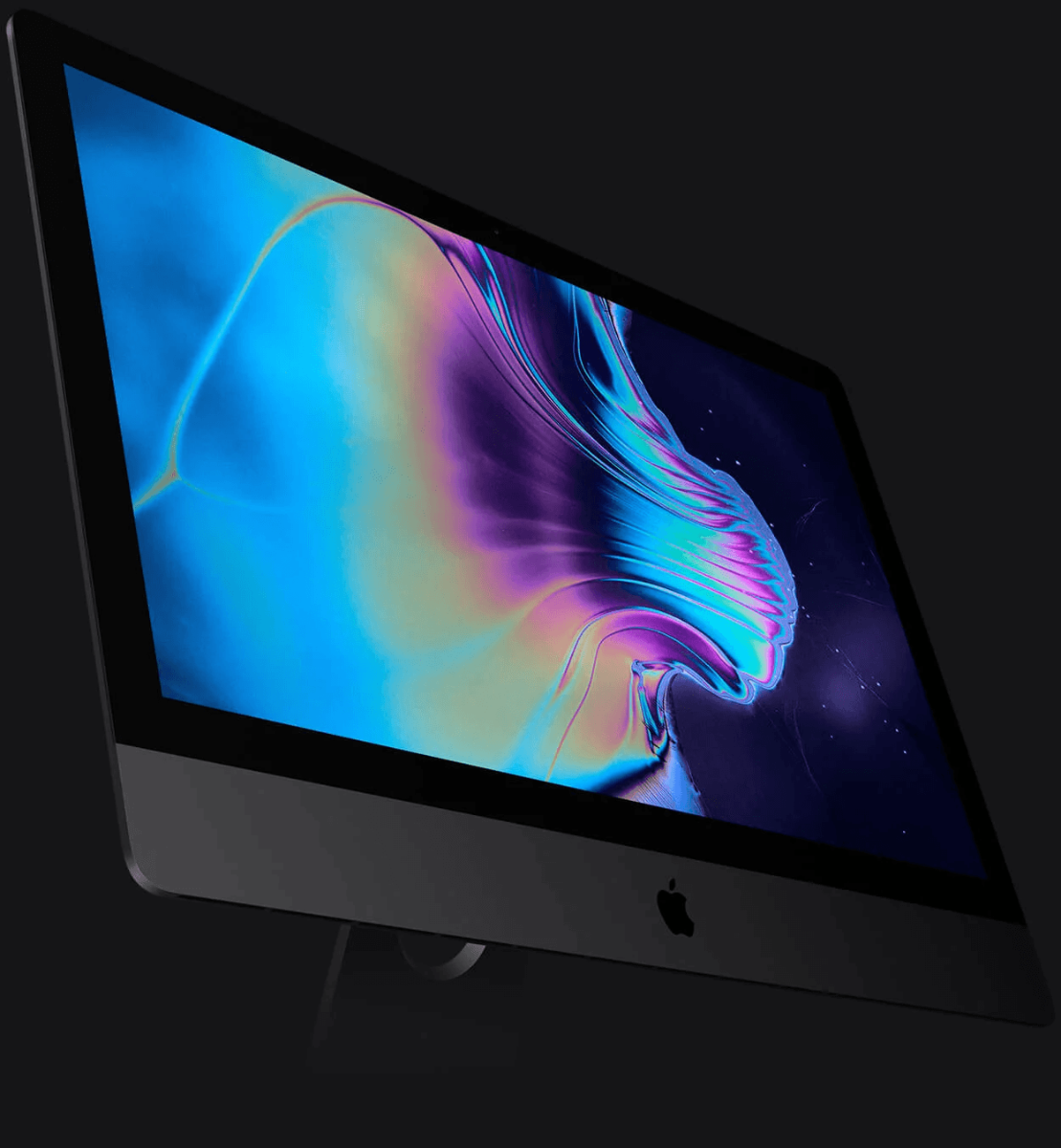 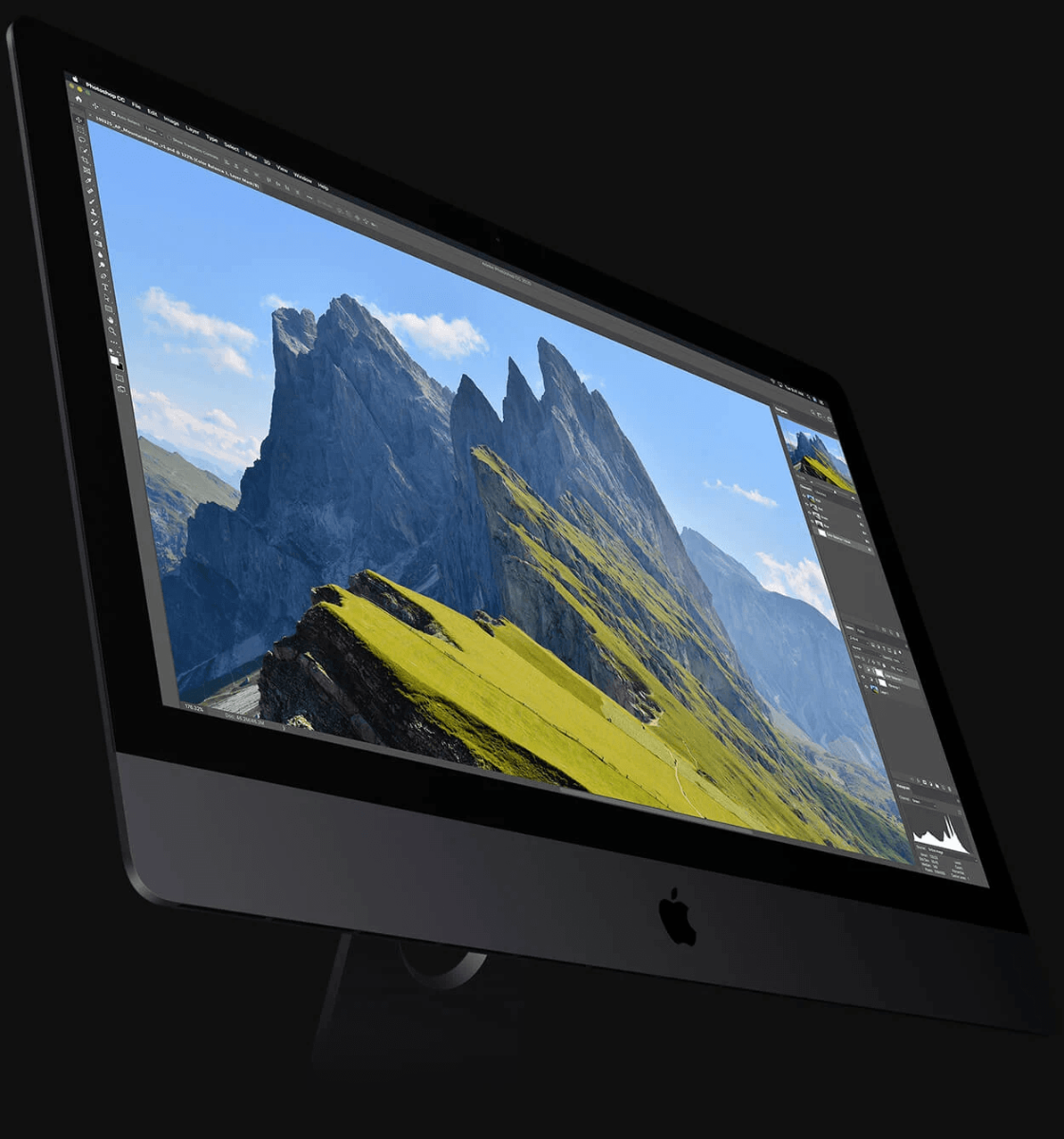 A billion colours on your display means every photo appears just the way
it was shot, with supersmooth gradients and vastly reduced banding.

iMac Pro puts the power of a workstation behind a stunning Retina 5K
display, in a sleek enclosure just 5 mm wide at its edge. With your whole system
powered by a single cable, your workspace stays free of clutter. It’s a beautifully efficient design that lets you focus all your attention on what you’re creating —
not what you’re creating with. 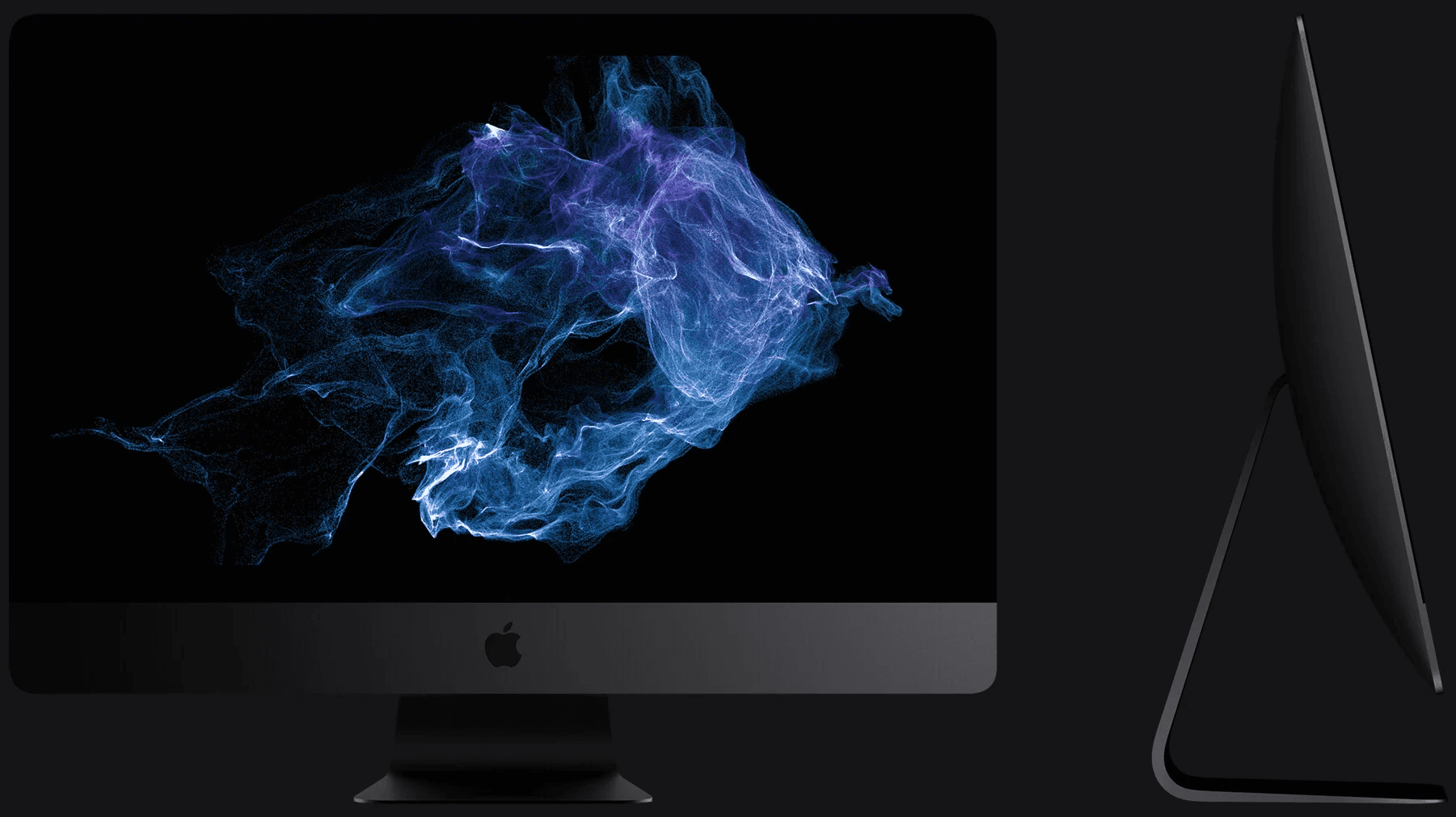 Packing all that performance into such a slim all-in-one design required a new
approach to cooling the system. Apple redesigned the thermal architecture of
iMac Pro with innovative dual blowers, a high-capacity heatsink, and extra venting.
The result? Almost 75 percent more airflow and an 80 percent increase in system
thermal capacity. Which lets iMac Pro handle 500 watts — 67 percent more power than the 27-inch iMac. 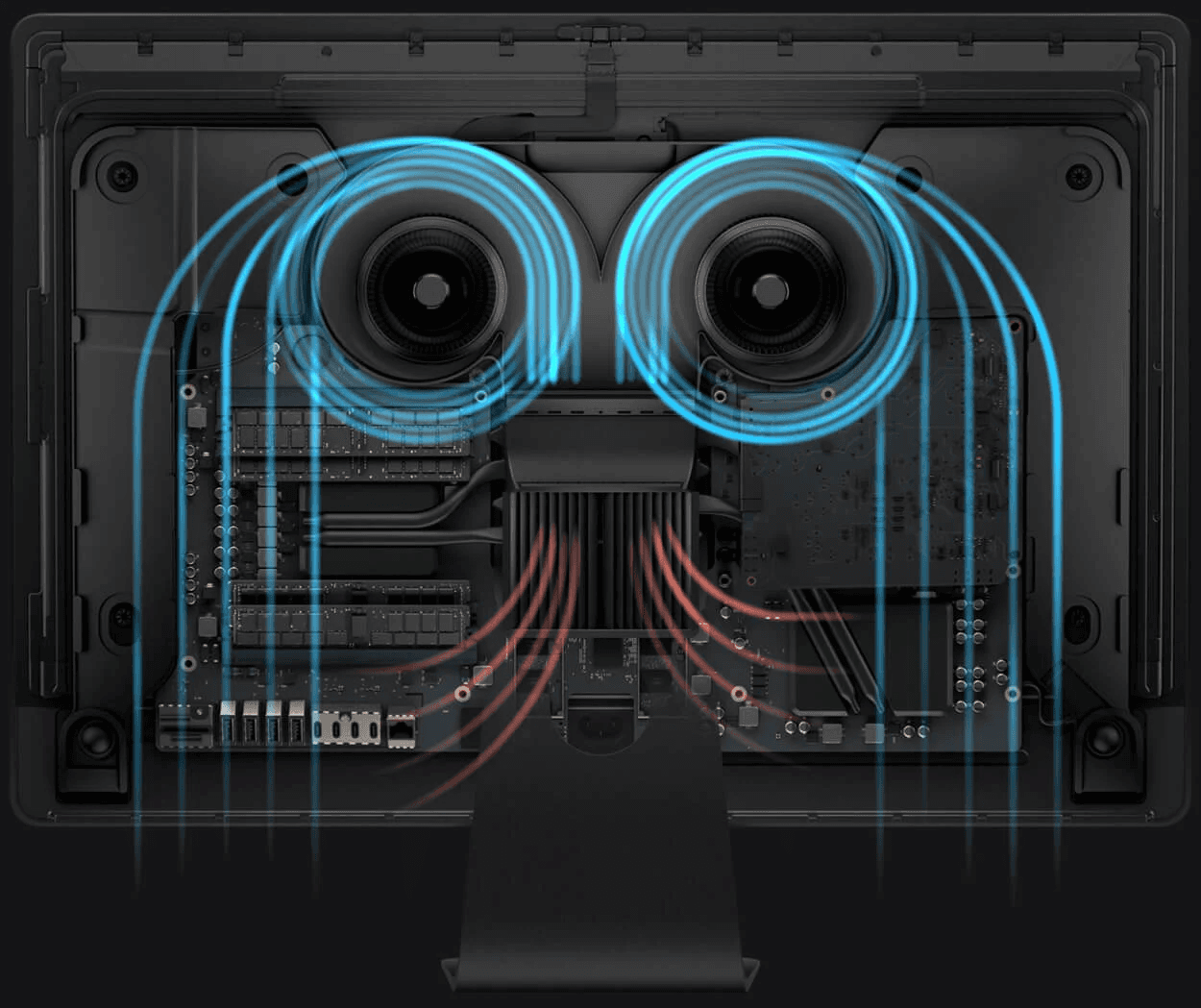 The enhanced stereo speakers in iMac Pro deliver broad frequency response,
rich bass, and impressive volume. So you’ll be able to hear that crashing cymbal,
multilayered effect, or sample-based sound, all with remarkable fidelity.
And with four beamforming mics, your voice is heard loud and clear over
any background noise. 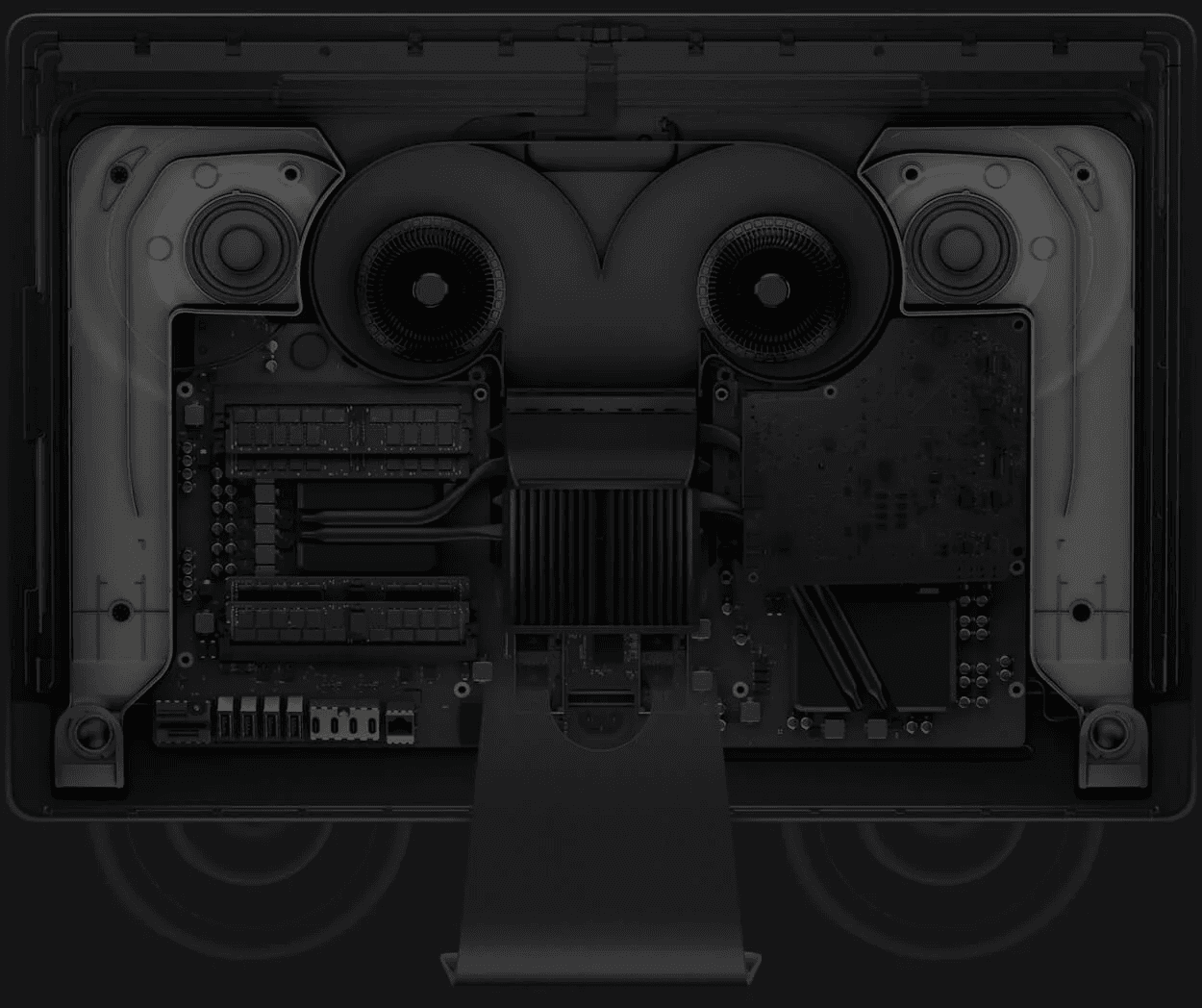 Accessories with a dark side.

You even get space gray accessories to match your iMac Pro — all wireless,
rechargeable, and beautiful. The Magic Keyboard includes a numeric keypad,
and to go with it you can choose either the Magic Mouse 2 or the Magic Trackpad 2.

Technical specifications are subject to change.

Software and content may be sold separately. Title availability is subject to change.